A standing live ram held by a hoisting belt was the emblem adopted by the Duke of Burgundy, when he founded the Order of the Golden Fleece in 1430.

The great wealth he obtained from the wool trade in Flanders inspired his ambition to revive the empire of Charlemagne. The association with the epic journey of Jason and the quest for the Golden Fleece emerged from his interest classical literature. This quest was seen as expressing the Renaissance ideal of friendship: that each is as watchful and caring for the other as for a second self, and that neither will flatter or mislead but only speak the truth to the other.

The Golden Fleece was recognised as the highest reward for piety, service and loyalty to principles wider than individual gain.

Golden Fleece became a popular name for English pubs that were meeting places for people associated with the wool trade. After 1717, lodges of freemasons were identified by the name of the pub where they met. A lodge meeting at the Golden Fleece tavern at Bury St. Edmunds was number 81 in the Engraved List of Regular Lodges for 1734. A feature of English pubs was singing sessions around a single, large table.

The Order of the Golden Fleece symbolised the union of Flanders and Burgundy and the rebirth of the Lotharingian kingdom of Charlemagne's descendants. The foundation of this order of chivalry, dedicated to Saint Andrew, by the Duke of Burgundy was announced in 1430 at the celebration of his marriage. 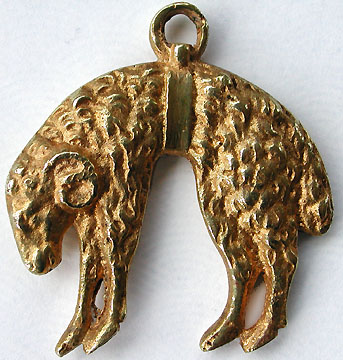 Jason and The Argonauts

The quest for the Golden Fleece was an epic journey into the unknown set during the Bronze Age before the Trojan War.

The Colchian Dragon disgorges the hero Jason. Behind it the Golden Fleece hangs from a tree. Athena oversees the scene, holding a small owl. The Dragon was an giant serpent, which guarded the Golden Fleece in the sacred grove at Colchis. In this version of the story, Jason was first devoured and then disgorged by the Dragon. 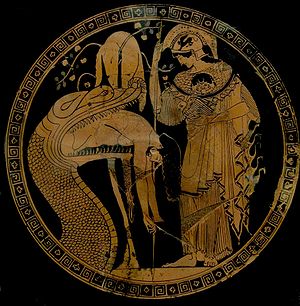 Golden Fleece > about us

craftsman's art and music's measure
for thy pleasure all combine.